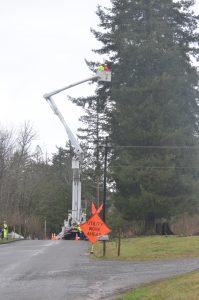 END_OF_DOCUMENT_TOKEN_TO_BE_REPLACED

On September 26, 2016, two men were seriously injured when a crane at a construction site in West Seattle made contact with overhead power lines close to the job site.  The incident occurred at about 10:30 a.m. near 42nd Avenue Southwest and Southwest Oregon Street.  As lawyers representing injured construction workers, we have unfortunately seen these types of incidents many times in the past.

Data from the NIOSH National Traumatic Occupational Fatalities (NTOF) Surveillance System indicates that electrocutions accounted for approximately 450 of the 6,400 work-related deaths that occurred annually in the United States from 1980-1989.  Preventing Electrocutions of Crane Operators and Crew Members Working Near Overhead Power Lines, DHHS (NIOSH) Publication No. 95-108 (May 1995).  In the four-year period from 1985 to 1989, the Occupational Safety and Health Administration (OSHA) reported 113 deaths from crane and boom truck contact with overhead power lines.  Id.  Nearly 30 percent of all electrocutions on the job site involve crane and boom operation.  Id.

As a direct result of the hundreds of electrocutions throughout the nation caused by crane and boom truck contact with overhead power lines, a number of regulatory standards have been established to prevent these tragic deaths by state and federal governments.  On the national and international level, OSHA and the American National Standards Institute (ANSI) have adopted strict standards to help prevent work site electrocutions.  See 29 CFR 1926.550; Mobile and Locomotive Cranes, The American Society of Mechanical Engineers, ASME B30.5-1994.

END_OF_DOCUMENT_TOKEN_TO_BE_REPLACED

Protecting against falls in a construction zone can greatly reduce injuries and fatalities for the most lethal part of the construction industry.  To protect against falls, guardrails, safety nets, floor covers, and restraint systems should be put in place.