The National Highway Traffic Safety Administration (NHTSA) reported that highway traffic deaths increased by 13.5 percent during the first quarter of 2012. This increase is the largest jump in traffic fatalities since 1979. Given that traffic deaths in 2011 were at their lowest since 1949, this recent increase in car accident fatalities is especially concerning.

However, the NHTSA warned that the first quarter results should not be used to draw conclusions about the traffic death rate for the rest of the year. It is not clear why the rate increased, but the weather and a slowly resurging economy are being considered as factors.

Regardless of the cause of the recent increase in traffic fatalities, there are steps you can take as a motorist to protect yourself on the road. The National Safety Council suggests the following:

END_OF_DOCUMENT_TOKEN_TO_BE_REPLACED

When a chunk of I-5 pavement flew up and smashed through the windshield of a car carrying a family of four, the dangers of Washington’s crumbling roadways became all too real. The family was headed down I-5 near Northgate on Saturday when a brick-sized concrete panel came off the road, crashed through the car’s windshield and hit the father who was in the passenger seat. His wife was driving the vehicle and their son and daughter were in the back seat.

“The rock hit me so hard in the chest, it literally took my breath away,” the man said. He had to have stitches on his chin and inside his mouth. His chin and chest were also severely bruised by the piece of pavement.

Secretary of Transportation Paula Hammond said road crews built much of the interstate in the 1960s, and more than 50 years of heavy use has taken its toll. Hammond said the agency doesn’t have the staff or cash to fix everything that’s falling apart, and the statewide to-do list just keeps getting bigger. “As our transportation system has more wear and tear on it, and as we go longer without revenue dollars to just take care of the system that we have, we’re unfortunately going to see more of this kind of thing,” she said.

END_OF_DOCUMENT_TOKEN_TO_BE_REPLACED

For years, studies have confirmed the dangers of driving under the influence of alcohol. But, now, a new study reveals that there is a state of driving nearly as dangerous as drunk driving: sleepy driving.

The study, which, according to Reuters Health, was conducted by Dr. Nicholas Moore at the Centre Hospitalo-Universitaire de Bordeaux in France and published in the Archives of Internal Medicine, reveals that drivers who are impaired by alcohol or sleepy are at least twice as likely to cause a motor-vehicle accident when compared to drivers who are neither drunk nor tired.

The study reviewed the circumstances of 679 drivers who remained in the hospital for at least 24 hours following motor-vehicle accidents from 2007 to 2009. According to the results of the study, factors such as being a “young driver” (18 to 29 years old), driving under the influence of alcohol and being sleepy are indicators of an increased risk of being involved in a car accident.

END_OF_DOCUMENT_TOKEN_TO_BE_REPLACED

A recent study by the Society of Automotive Engineers (SAE) highlights startling conclusions for those of us who have been listening to warnings about distracted driving. It is true that distraction causes accidents, about 950,000 annually. The SAE found, however, that one simple driving behavior could be linked to more than twice that many motor vehicle accidents per year, around 2 million. That behavior is failure to use turn signals properly when turning or changing lanes.

When a driver doesn’t signal his or her intention to shift to another highway lane, other drivers nearby don’t have the opportunity to modify their own behavior to enhance safety. For example, a car may be speeding up when a vehicle suddenly cuts in front of it from another lane, and it may be too late for the initial driver to avoid rear-end collision. A simple signal of the lane change, though, could have warned the driver not to speed up just then, or to change lanes to avoid the other car.

Drivers are required to signal when turning or changing lanes. Signaling is a fundamental rule of the road, and it’s the law, just like stopping for a red light. The SAE has determined, however, that almost half of drivers either don’t signal when changing lanes, or don’t turn the signal off again after turning it on for a lane change. About a fourth of drivers make this mistake when turning. Engineers estimate that this error happens 2 billion times a day on America’s roads.

END_OF_DOCUMENT_TOKEN_TO_BE_REPLACED

At around 1:30 a.m. on Tuesday, March 20 there was a head on collision on an I-5 ramp at the I-90 interchange involving a vehicle traveling the wrong way. One person was killed in the crash and multiple others were injured.

Those injured in car accidents and the surviving families of people killed in accidents often have claims against the driver at fault. You may contact our firm for more information and a free, no obligation consultation at 866-377-0191. 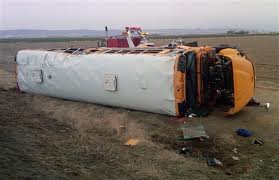 A school bus overturned on the morning of March 12, 2012 on a central Washington highway outside of Quincy, Washington, injuring dozens of children, including three seriously, before coming to rest at the edge of a field, authorities said.

According to news reports, the bus veered off the road, overcorrected and rolled on Highway 281 just south of Quincy, Washington.

The bus came to rest on its passenger side, and all 39 students on board suffered injuries of some kind, though most were minor scrapes, bruises and bloody noses, Martin said. Three children were in serious condition, but none of the injuries was believed to be life-threatening.

END_OF_DOCUMENT_TOKEN_TO_BE_REPLACED

Over the last week, Seattle has been hit with a major snow and ice storm that has resulted in hundreds of motor vehicle collisions. There are several steps you can take as a motorist to prevent a collision in snow and ice. First, when following behind other vehicles, you need to provide ample distance between the front of your car and the vehicle ahead. In icy or snowy weather conditions, you should allow at least six seconds between your vehicle and any forward vehicle. This means if you are traveling at 55 miles per hour you should allow 486 feet of stopping distance. Many motorists fail to allow sufficient stopping distance and are unable to stop in icy or snowing conditions on the interstate.

Third, you should make sure that the tires on your vehicle are adequate for snow and ice. If you are using summer tires or your tires are bald, you will not have adequate traction in the snow. If you frequently travel in snow and ice, you should consider the purchase of studded snow tires.

END_OF_DOCUMENT_TOKEN_TO_BE_REPLACED

The Federal Motor Carrier Safety Administration (FMCSA) is tasked with prevention of injuries and fatalities related to commercial motor vehicle crashes. Given the prevalence of truck accidents which occur annually on the nation’s roadways, the administration has not been granted an easy mission.

One of the tools that the FMCSA hopes will lead to effective safety initiatives in the future is the Commercial Driver Individual Differences Study. In addition to receiving feedback from commercial trucking fleet managers, the study will analyze surveys from over 15,000 truck drivers on a range of personal subjects.

The anonymous surveys are designed so that the administration can compare differences among drivers, in order to spot patterns regarding what type of behaviors may lead to a greater propensity for accidents. As stated by the FMCSA, the study’s purpose is “to identify, verify, quantify and prioritize commercial driver risk factors.”

END_OF_DOCUMENT_TOKEN_TO_BE_REPLACED

The National Highway Traffic Safety Administration (NHTSA) released a study in August which determined that anti-rollover technology reduces the risk of a fatal crash by 18 percent. The NHTSA said the technology cut overall car crashes by six percent. For passenger cars, the risk of fatal crashes fell 23 percent and 20 percent for light trucks and vans. The government study was based on a review of crash data from 1997 through 2009.

The technology has been available for decades; Mercedes and BMW first used it in 1987. However, like airbags before it, the use of electronic stability control (ESC) was initially very limited, and only after NHTSA issued formal regulations did automakers make ESC widely available. ESC systems use automatic computer-controlled braking of individual wheels to prevent the wheels from skidding and to help the driver maintain control of the vehicle.

END_OF_DOCUMENT_TOKEN_TO_BE_REPLACED

According to the Associated Press, on March 23, 2011, a veteran BNSF Railway locomotive engineer, a conductor trainee and the shuttle driver giving them a ride were the three people killed on Wednesday afternoon when their van was struck by a freight train at a BNSF rail yard near Longview, Washington.

Loehr had recently moved to Seattle, according to The Columbian of Vancouver, Wash.